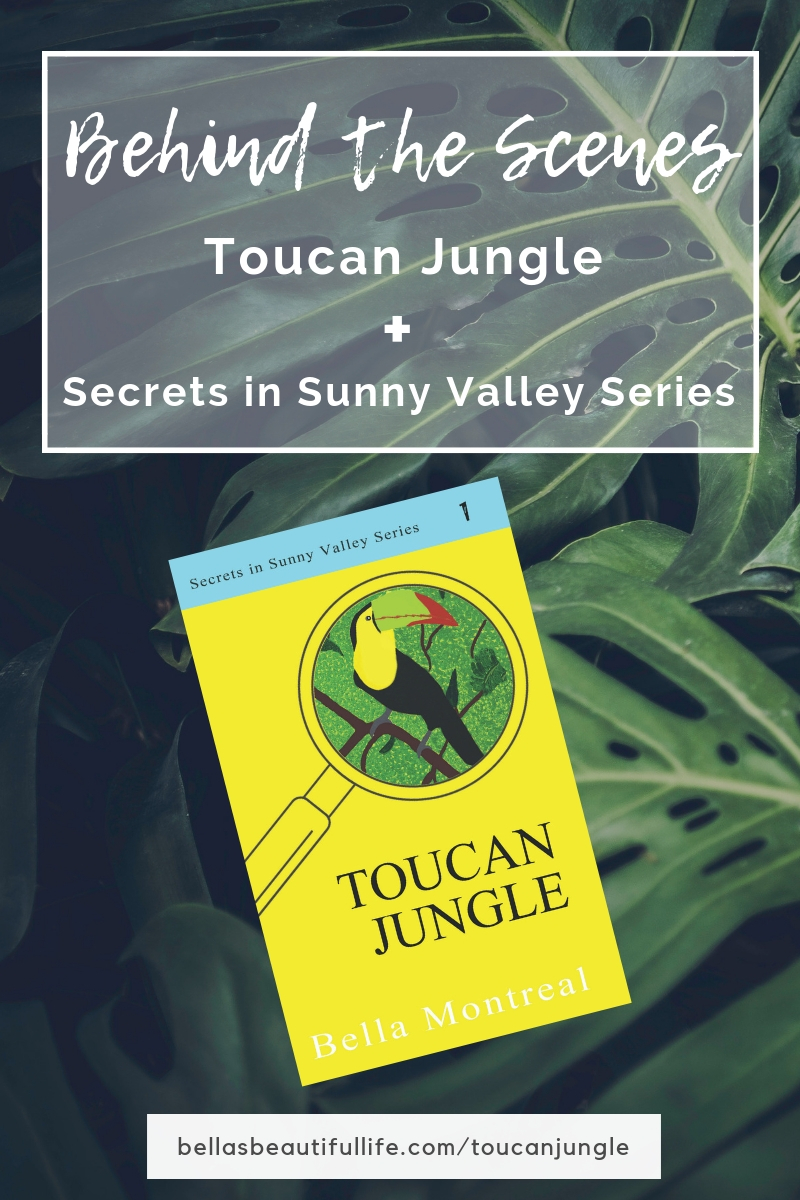 Toucan Jungle + Secrets in Sunny Valley Series || Behind the Scenes

There is long story behind Toucan Jungle and The Secrets in Sunny Valley series I have just launched and I thought it would be fun to share some of it with you guys. 😀

I have been a huge mystery fan for a long time. I’ve read all of the memorable “classic” mysteries, such as The Hardy Boys, Nancy Drew, Trixie Belden, Sherlock Holmes, and other more modern mysteries for both kids and adults. The one thing that always struck me as weird is that despite how good a lot of the children’s mysteries were, they lacked a relatable side. Nancy Drew and the Hardy Boys were pretty much always happy unless a friend – or in the Hardy Boys case a sibling – went missing for the umpteenth time. They were popular and had perfect friends, perfect families, and perfect relationships. They were lovable characters, almost too loveable at times. They didn’t really have flaws, or bad days, or days where they just didn’t do anything spectacular. Nancy Drew was this untouchable, talented barbie doll that often lacked personality. Don’t get me wrong, I love Nancy Drew and the Hardy boys, but I feel like the authors could have made them more authentic.

The books I have loved reading most are ones where the characters were independent, relatable, or where the characters actually seemed real (This is one of the main reasons I really liked the Trixie Belden series). As The Secrets in Sunny Valley series goes on I want to build the main characters into people that remind you of yourself.

The main characters in Toucan Jungle are Angie and Zach Montreal (they are siblings and will be in every book of the series) and their friends Lily, Kristen, and Cody (they are siblings and at least one of them will be in pretty much every book of the series, Cody’s role in the stories will change later). Since Toucan Jungle is the first book, I didn’t want to overwhelm readers by giving away all of the back story to the main characters. Throughout the series readers will be able to learn more about who the main characters are and why they do what they do.

Through the series I want people to see that Angie and Zach are people just like them. They have bad days, they’re sad sometimes, they have friendship problems, they act without thinking sometimes, they make mistakes and get into bad situations, they trust the wrong people. I want readers to be able to say, “Oh I do that too”, or “something sad like that happened to me too”, or “I think like that too”. To make it more authentic I am definitely going to be adding in bits and pieces of true stories and personal experiences throughout the series.

The story behind Toucan Jungle

In middle school and early high school my brother and I would take turns reading aloud to each other from Hardy Boys and Nancy Drew books. I would get impatient to see what the story was about, so I would typically speed read them and then later we would read them aloud to each other lol. As the book went on and when we finished the story, we would talk about the plot and laugh at the lame parts and discuss where the books a lot of times repeated the same scenarios over and over till it became terribly predictable.

There was this one day when I was 14 where I had been reading a newer mystery (not a “classic”) and I started thinking I could write something like this, maybe even better. At this point I had already written a lot of songs and poems and had written quite a few shorter stories. I knew what it was like to write a story but had never seriously contemplated writing a full novel let alone a book series. So, that one night I decided I would write a mystery as a gift for my brother. When I first started brainstorming ideas for the book that night, the thought of it evolving into a series never crossed my mind. I’m not exactly sure at what point of the story I realized “Hey this would be a fun series to write”, but it was pretty soon after I started writing the first draft. I was only partially through the first draft, when I started building up ideas for other titles that would go along with Toucan Jungle and eventually become The Secrets in Sunny Valley series. Toucan Jungle took quite a while to write and edit because I was a fulltime high school student with lots of hobbies, and I kept coming up with “brilliant” ideas for other books. From that point of high school to when I graduated, I had started the plot lines and first drafts of about a dozen books for the series.

By time I was 16 I had edited, re-edited, and changed parts of Toucan Jungle about nine times. By this point I had learned a ton about the publishing industry, how to break into that world, promote the book, etc. I had a cover, I had a publisher, everything was set for it to be released, but there was a lot going on and I didn’t feel like the story was finished. I still felt that it wasn’t “perfect” enough, so I made the decision to put the release on hold until I figured out what it was I wanted to change or “fix”.

Towards the end of 2017 and into 2018 I started realizing more than ever before that a lot of times the best time to do something is now (I won’t get into all that, I’ll save that for another article for another day lol). With the help of my brother I came up with a new idea for the cover of the book, and a new perspective of how to release it. The last few months of preparing for the release have been a complete whirlwind and I’m super excited to see what the future holds for Toucan Jungle and The Secrets in Sunny Valley series.

Please go to the Instagram Feed settings page to create a feed.