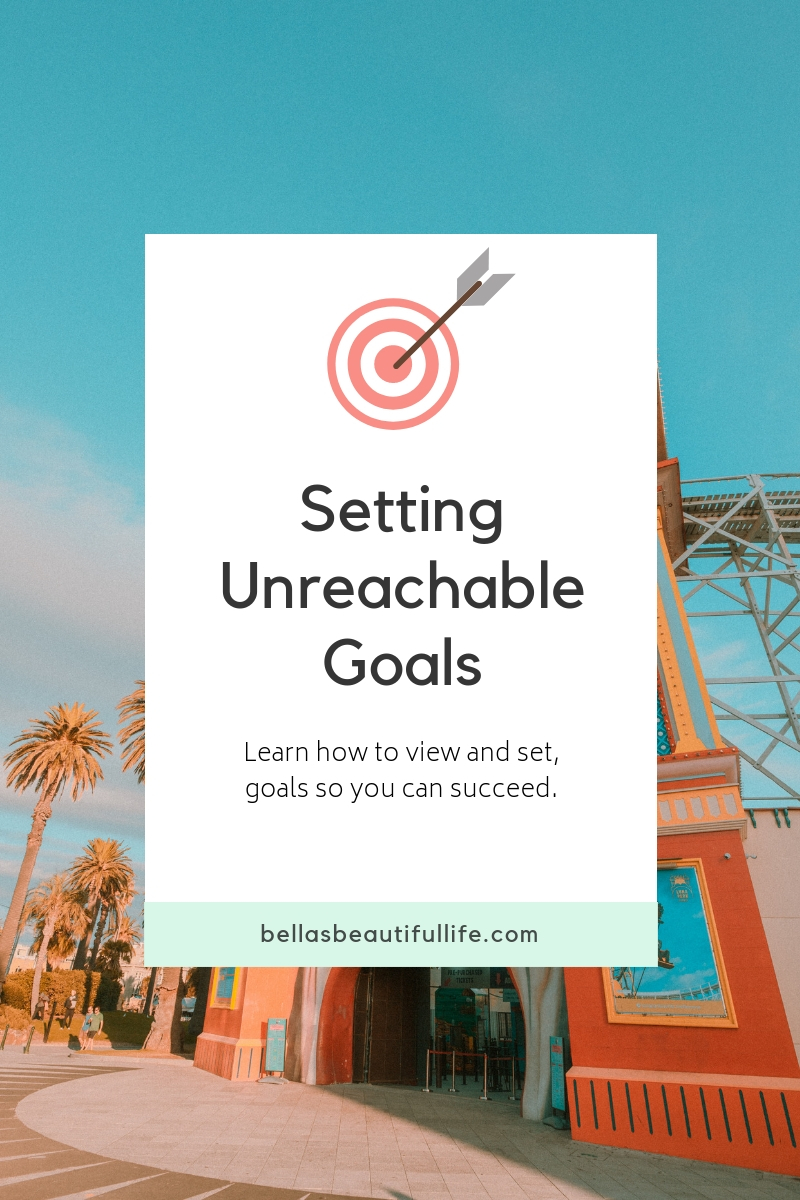 Why You Need to Set Unreachable Goals

If you’re like me, you probably grew up hearing about goals being just another word for New Year’s resolutions and how people would start their “new life” on every January first. In high school I started setting New Year’s resolutions, that I would typically forget about by February except for maybe one or two. After a few years of being annoyed with myself for failing on my resolutions I started getting a little more serious about them, and I think it was about senior year when I actually completed a couple of things off my goal list for the year.

When you’re learning about entrepreneurship it doesn’t take long to find information about creating to do lists and setting/achieving goals. So, when I first started exploring the world of entrepreneurship I was bombarded by the experts’ “valuable information”. There were all of these “experts” saying to only set tiny goals that way you achieve the goal and don’t get disappointed in yourself. Sounds smart, I mean you want to be proud of yourself right?  It sounded like sound logical advice to me at the time. The problem is that it only is effective if you want to stay in your comfort zone and never grow. And the reality is goals are supposed to make you uncomfortable and force you to grow.

If you are barely figuring out how to complete goals than setting small goals might be a good option for a short time while you learn how to set goals are and what your comfort zone limits are (but don’t get comfortable and fall into a rut). This is what I did until I figured out how I personally best remembered and pursued my goals. Of course when you have really big goals you will have to break them down into tiny goals, otherwise you will get overwhelmed and probably won’t make much headway with them.

By never setting big goals so you don’t disappoint yourself, you are literally telling yourself that you aren’t capable of completing anything significant and creating a failure mindset. This often leads to more and more unconscious failure and a false sense of accomplishment. What does this mean? It means that you feel accomplished for staying mediocre and not reaching your full potential. Let’s say you always go to bed at 9 o’clock, and you set a goal to continue to go to bed at 9 o’clock, guess what happens? You meet the goal, and you feel proud of yourself and like you accomplished something, when in reality you are staying exactly the same. I know this is a lame example, but this is what we’re doing when we set goals that we KNOW we can easily accomplish or that don’t really challenge us. By setting goals that require minimal effort we are training ourselves to be minimal and actively do the bare minimum which results in people just floating through life and never accomplishing anything impressive.

Believe it or not though there is something even worse than setting tiny reachable goals. It’s the people that don’t set any goals because they know they will fail all of them since they have no discipline. Last December I was talking to some people I knew about how the year was winding down. I mentioned how I was proud of myself because I had completed almost every single New Years. I said that I had set a goal to read 20 books during the 2018, and I had read well over 25. The one girl mentioned that she didn’t make New Year’s Resolutions anymore because she knew she would always fail them and it was easier to avoid the guilt of not starting or finishing them by just not setting any goals. She then went on to suggest that for the next year I should set more smaller goals than I had the previous year that way I could make sure I completed them. This took me a moment to process, for a number of obvious reasons but these are the conclusions I came to:

There were a lot of ways I could’ve and maybe should have responded to her, but all I said was that I was planning on setting bigger goals for 2019 than I had for 2018, but that I was going to break them down into way smaller goals that were almost like a ladder to my actual goal. The conversation fizzled out soon after that. Regardless if you are new to goal setting or an expert goal setter, I would recommend you think of your main goal as being the destination at the top of the ladder, and each rung as a mini goal that is leading you to the main goal. Once I started thinking about my goals like this reaching my big goals seemed much more simpler and doable regardless of how much work I had to put in. Here’s a graphic to help you put it into perspective.

Is it hard to reach big goals even when you have a bunch of tiny sub-goals underneath them? Yes! That is why most people never reach their goals because if you don’t spend as much time as you possible can on your goals you will never reach them. Even though it’s hard and sometimes almost impossible it is still a hundred and fifty percent worth it, and that’s what I remind myself of whenever I start getting overwhelmed with pursuing my goals.

But the truth is you need to be setting goals so big that no one around you will even believe them. Are your big goals going to make you uncomfortable at first? Yes! Are people going to laugh or make rude comments about your goals? Definitely! If they don’t, then you need to go home and rewrite your goals and make them even bigger. If the goals you are setting aren’t forcing you to “level up” to an even better more capable version of yourself than they aren’t big enough. There are a lot of times where we fall short of achieving our goals and that is okay so long as we made them big enough in the first place and are actively working towards them. Let’s say you and your friend Jack want to make $5000 more dollars this year than you all did last year. You set a goal to make $5,000 more dollars this year than you did last year, you fall short and end up only make $2,500. But let’s say Jack set a goal to make $10,000 (even though he had only wanted to make $5,000) more than last year and he falls short and only makes $6000. Which scenario is better? Both people “failed” to meet the original goal but Jack pushed himself harder and ended up making more than he had wanted in the first place! It’s better to fail a short distance away from being amazing than it is to succeed at being an average person doing the bare minimum.

Another thing you need to make sure you’re doing when you set your goals is be specific, don’t generalize. Don’t say “I’m going to try to eat healthier this summer” or “I’m going to read more”. Instead say “I am going to eat two helpings of fruits or vegetables every day this summer” or “I am going to read one book each month”. If you’re the kind of person who isn’t super ambitious and want to stay where you’re at that’s fine, but don’t pretend you’re ambitious. Don’t create a bunch of super minimal goals just to act like you’re trying to do something. Either go all in and chase the biggest goals possible, or be you and admit that you’re comfortable staying in the same place. Either way is fine just make sure you’re staying authentic and telling the truth.

I hope you all enjoyed todays article, I would love to hear what you’re goals are and how you’re going to start setting bigger goals. If you want to, go comment your biggest goal on today’s Instagram post. 😀