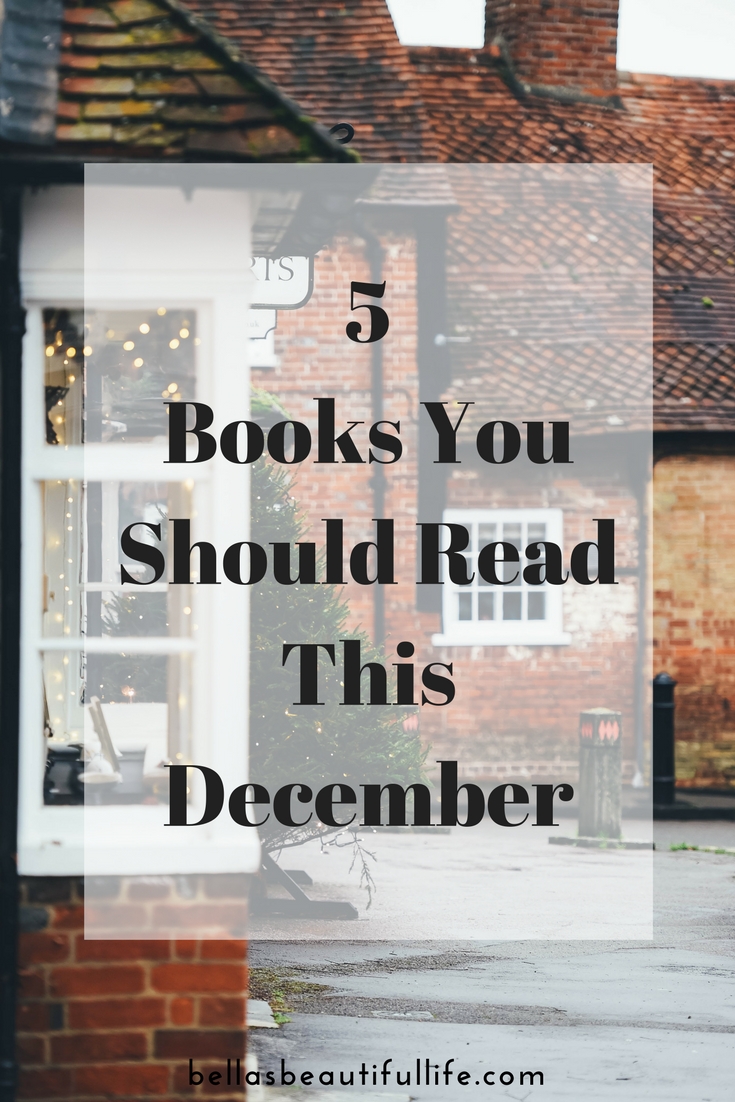 5 Books You Should Read This December || Blogmas #3

Happy third day of Blogmas! Today I am sharing a small part of my winter reading list. Each winter I like to read several Christmassy fiction books. I love to read (I’m a writer so I guess that makes sense) and sadly, last winter I didn’t have the time to read for fun. This year I plan on making up for all of my missed reading. 😉 Every year in addition to reading my “favorites”, I will buy a couple new Christmas books to read during December. I haven’t read the new books I’ve gotten, so I am not going to be talking about any of those.

Christmas books are different than “regular” books, because most people aren’t going to be reading Christmas themed books in mid-summer. If you don’t feel like paying $15+ per Christmas novel, because you know you’re only going to read it once, skip going to your local major bookstore (such as Barnes and Noble). Instead check out your local used bookstore or thrift shop. Often times you can find books (especially Christmas ones) for a very low price and in excellent condition. Anyways, here are the Christmas books I recommend reading. 🙂

#1 The Christmas Hope by Donna VanLiere

Patricia and Mark Addison have long given up the hope of having a meaningful Christmas. But this year, Patricia’s job as a social worker will lead her to a very special five-year-old. Against her better judgment, Patricia bends the rules and takes the little girl to her own home. Through the presence of Emily in their house, and her penetrating questions about heaven, the Addisons learn that there is no sorrow so great that faith cannot help you find your way through. And Christmas will once more be a time of joy in their home. The Christmas Hope is a story of love in the face of loss, joy when all seems hopeless, and how light can shine into the darkest places.

#2 Promise Me by Richard Paul Evans

Richard Paul Evans is a #1 Best Selling author, and it is easy to see why, as he is incredibly talented. I love his easy to read style and detailed writing.

Beth Cardall has a secret. For eighteen years, she has had no choice but to keep it to herself, but on Christmas Eve 2008, all that is about to change.

For Beth, 1989 was a year marked by tragedy. Her life was basically falling apart. Her six-year-old daughter, Charlotte, was suffering from an unidentifiable illness. And her marriage transformed from a seemingly happy and loving relationship to one full of betrayal and pain. Her job at the dry cleaners was increasingly at risk; and she had lost any ability to trust, to hope, or to believe in herself. Then, on Christmas Day, as she rushed through a blizzard to the nearest 7-Eleven, Beth encountered Matthew, a strikingly handsome, mysterious stranger, who would single-handedly change the course of her life. Now she beings to wonder, who is he and why does he seem to know so much about her? He pursues her relentlessly, and only after she’s fallen in love with him does she learn his incredible secret, changing the world as she knows it, as well as her own destiny.

#3 Angels at the Table by Debbie Macomber

I have read quite a few of Debbie Macomber’s novels (mostly Christmas themed ones). But I should consider reading more of her books, because I enjoy her writing style. It’s relatable and flows easily and at times is almost sarcastically funny.

Shirley, Goodness, and Mercy know that an angel’s work is never done, especially during a time as wondrous as New Year’s Eve. With an apprentice angel, Will, under their wings, they descend upon Times Square in New York City eager to join in the festivities. And when Will spies two lonely strangers in the crowd, he decides midnight is the perfect time to lend a heavenly helping hand.

Lucie Farrara and Aren Fairchild meet after bumping into each other—seemingly by accident—in Times Square on New Year’s Eve. They immediately hit it off and find they have a lot in common: Lucie is a burgeoning chef and Aren is a respected food critic. But just as quickly as they’re brought together, another twist of fate tears them apart, leaving Lucie and Aren with no way to reconnect.

A year later, Lucie is the chef of an acclaimed new restaurant and Aren is a successful columnist for a major New York newspaper. For all the time that’s passed, the two have not forgotten their one serendipitous evening—and neither have Shirley, Goodness, Mercy, and Will. To reunite the young couple, the angels cook up a brilliant plan: mix true love, a second chance, and a generous sprinkle of mischief to create an unforgettable Christmas miracle.

Yes, another one by RPE.

When Luke Crisp graduates from business school, his father, CEO and cofounder of Fortune 500 Crisp’s Copy Centers, is ready to share some good news: he wants to turn the family business over to his son. But Luke has other plans. Taking control of his trust fund, Luke leaves home to pursue a life of reckless indulgence.

But when his funds run out, so do his friends. Humbled, alone, and too ashamed to ask his father for help, Luke secretly takes a job at one of his father’s centers. There he falls in love with a struggling single mother and begins to understand the greatest source of personal joy.

Lost December is Evans’s modern-day holiday version of the biblical story of the prodigal son, a story of redemption, hope, and the true meaning of love.

In this novel, Evans reimagines the biblical story of Joseph, and presents an inspiring modern story of family and forgiveness.

Joseph Jacobson is the twelfth of thirteen siblings, all of whom are employed by their father’s successful Colorado advertising company. But underneath the success runs a poisonous undercurrent of jealousy; Joseph is his father’s favorite and the focus of his brothers’ envy and hatred. When the father seems ready to make Joseph heir, the brothers force Joseph from the company and his Denver home. Alone and lonely, Joseph must start a new life.

Joseph joins a Chicago advertising agency where his creativity helps him advance high up in the company. He also finds hope for a lasting love with April, a kind woman with a secret. However, all secrets hold consequences, when Joseph learns the truth about April’s past, his world is turned upside down. Finally, Joseph must confront his own difficult past in order to make his dreams for the future come true.

Well, that is all for today. If you read one or more of these, let me know what you think of it! What are some of your favorite books to read in December?