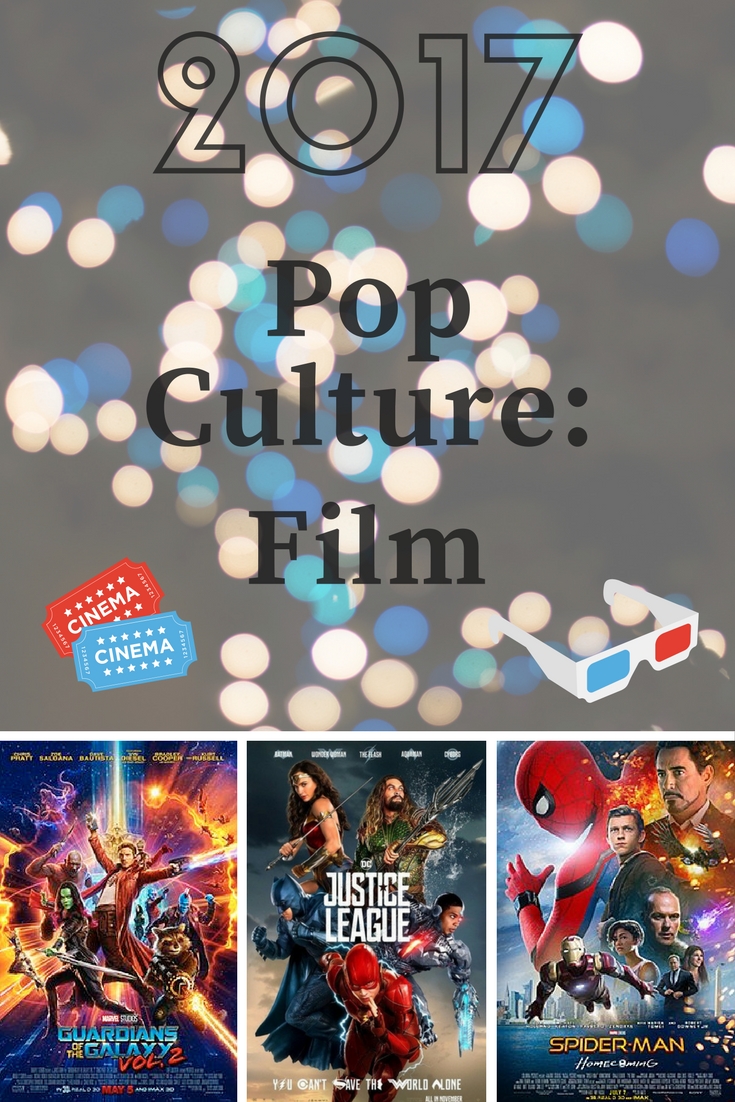 I don’t really have any interest in the lives of most famous people and “significant” pop culture events. And I’ve never been able to grasp why people are fascinated with the lives of celebrities they don’t know at all. But I do enjoy seeing the ideas that the film industry comes up with and their new twists on books and old films. 2017 is almost over so I thought I would share my thoughts on some of the movies I saw this year. I don’t think there were as many great movies and songs that came out in 2017 as there are some years, but the few that did come out were really good!

In the near future, a weary Logan (Hugh Jackman) cares for an ailing Professor X (Patrick Stewart) at a remote outpost on the Mexican border. His plan to hide from the outside world gets upended when he meets a young mutant (Dafne Keen) who is very much like him. Logan must now protect the girl and battle those who want to capture her.

This had to be my favorite film that was released this year! I usually don’t go twice to see a movie in theaters, but my brother and I saw this one several times in the theater, lol. I honestly can’t think of anything they could have done to make it a better film. There were dark parts and tons of action of course, but all in all this was an amazing movie.

Lifelong friends Willie (Morgan Freeman), Joe (Michael Caine) and Albert (Alan Arkin) decide to forget retirement and step off the straight-and-narrow when their pension funds become a corporate casualty. Desperate to pay the bills and come through for their loved ones, the three men risk it all by embarking on a daring adventure to knock off the very bank that “stole” their money.

I thought this movie was pretty funny and different than a lot of the modern comedies that rely on crudeness rather than actual humor. If you like people to get justice for the wrong they’ve done, you probably wouldn’t enjoy the ending of this movie.

Peter Quill and his fellow Guardians are hired by a powerful alien race, the Sovereign, to protect their precious batteries from invaders. When it is discovered that Rocket has stolen the items they were sent to guard, the Sovereign dispatch their armada to search for vengeance. As the Guardians try to escape, the mystery of Peter’s parentage is revealed.

This was happy, funny, and sad movie. Rocket was as funny as ever and Groot was super cute. I liked how they intertwined funny moments into what would otherwise have been more serious scenes. The characters have a family like bond that is different than the kind seen in most super hero groups. I was disappointed that one of my favorite characters died…

Bound for a remote planet on the far side of the galaxy, members (Katherine Waterston, Billy Crudup) of the colony ship Covenant discover what they think to be an uncharted paradise. While there, they meet David (Michael Fassbender), the synthetic survivor of the doomed Prometheus expedition. The mysterious world soon turns dark and dangerous when a hostile alien life-form forces the crew into a deadly fight for survival.

If it hadn’t been for my brother I wouldn’t have gone to see this one (he’s a fan of Ridley Scott’s work). I like sci-fi and fantasy films, but the Alien series isn’t really my thing. I’m not sure if it’s just me or if this was a confusing movie. After I watched it I read the detailed summary of it and I was still confused lol. On the bright side, I thought the settings were pretty cool. The action scenes with aliens (when they grew, etc.) were also pretty impressive.

Thrilled by his experience with the Avengers, young Peter Parker returns home to live with his Aunt May. Under the watchful eye of mentor Tony Stark, Parker starts to embrace his newfound identity as Spider-Man. He also tries to return to his normal daily routine — distracted by thoughts of proving himself to be more than just a friendly neighborhood superhero. Peter must soon put his powers to the test when the evil Vulture emerges to threaten everything that he holds dear.

I really liked this Spider-Man movie, to me it was better than a lot of his newer movies. I know a lot of people consider Spider-Man to be whiny, but he really wasn’t in this movie. He seemed more mature and stable than how he’s been portrayed in some of the other films where he made “guest appearances”. The characters had more depth and all went together very well. I liked how there were funny things dropped in random moments throughout the film.

Before she was Wonder Woman (Gal Gadot), she was Diana, princess of the Amazons, trained to be an unconquerable warrior. Raised on a sheltered island paradise, Diana meets a pilot (Chris Pine) who tells her about the massive conflict raging in the outside world. Convinced that she can stop the threat, Diana leaves her home for the first time. Fighting alongside men in a war to end all wars, she finally discovers her full powers and true destiny.

With a $100.5 million debut, Wonder Woman had that biggest opening ever for a movie that was directed by woman. Aside from the villain (who I found disappointing), practically everything was perfect about this movie. To me the most annoying thing about the release of the movie, was hearing people complain about it being a feminist film. I also heard rather critical comments asking why did they make Diana a pretty, athletic westerner who wore makeup. Some even said that because she was too attractive and wore make up it “alienated” a lot of the audience. I think these statements are unfair and rather ridiculous. I have never heard people complain that they should have found less attractive actors to play the roles of Thor or Aquaman or a less athletic/strong actor to play the role of Superman. To me Wonder Woman is not a feminist film, it’s a fictional movie just like the ones about Superman, Batman, and Spider-Man. It’s a movie about a woman super hero, who is able to protect herself and those around her.

Tiffany travels to Lake Derrick to celebrate her 18th birthday at a Halloween frat party in the middle of the woods. Frantic and worried, Madea, Aunt Bam and Hattie hop in the car to save her from the same terrible fate that befell a group of teens there years earlier. Chaos soon strikes when the would-be heroes find themselves fighting for their lives against an array of spooky monsters.

This one was hilarious! I honestly think it was even funnier than the Madea one last year. There are enough spooky moments to give the movie a Halloween feel, but it’s not so scary that you won’t be sleeping for a few nights lol. There are definitely a lot of moments that will have you laughing! I would definitely watch this one again.

Imprisoned on the other side of the universe, the mighty Thor finds himself in a deadly gladiatorial contest that pits him against the Hulk, his former ally and fellow Avenger. Thor’s quest for survival leads him in a race against time to prevent the all-powerful Hela from destroying his home world and the Asgardian civilization.

This one was an interesting movie to watch and I enjoyed it. I liked how there were just enough funny moments to keep the film from being too dark and action packed. There are several minor characters that add a fun angle to the film.

A lavish trip through Europe quickly unfolds into a race against time to solve a murder aboard a train. When an avalanche stops the Orient Express dead in its tracks, the world’s greatest detective – Hercule Poirot – arrives to interrogate all passengers and search for clues before the killer can strike again.

This movie was kind of cheesy because it was your typical “whodunit” mystery, but I actually really enjoyed watching it – until the ending. The beginning wasn’t very great, because it doesn’t add anything to the movie. They make you think that it actually matters in the plot, but all it does is set the detective up, to make single funny (???) remark about an hour into the film.  The murder scene is very fake, and it’s almost like an afterthought. They must have spent all the budget on the location, lol.

I liked how they were traveling on a train through the beautiful mountains in unique outfits from that period of time… Then the ending happened. It killed (no pun intended) just about every moment I had enjoyed throughout the entire film. I think most people would’ve ask: “What were they thinking when they wrote that ending?”. Out of all the movies I have seen, I think its ending had to be in the top ten worst. They honestly would’ve been better off if they had ended it ten minutes early with the cliff hanger. Despite how I hate the ending, I probably would still watch it again.

Fueled by his restored faith in humanity, Bruce Wayne enlists Diana Prince to face an even greater threat. Together, Batman and Wonder Woman work quickly to recruit a team to stand against this newly awakened enemy. Despite the formation of a league of heroes, it may be too late to save the planet.

This one was really good overall. I didn’t really like Superman in this one though, he seemed really annoying. I did like how each of the Super heroes got about an equal amount of screen time. My favorite characters in this film had to be Aquaman and Wonder Woman.

I didn’t realize how many movies I had seen at the theater until I started this article, lol. There were a lot, so for this post, I just put a couple of the ones I saw. After thinking about it, I’m happy to see that I enjoyed the majority of the movies I saw. Even for the films I didn’t give 10 stars, the plots, graphics, and actors were all amazing. I’m hoping that 2018 offers even more memorable films! 🙂